Do you have a SharePoint or Office 365 project that you want to get off the ground in 2019? Register for our free webinar “Justify, Budget, Launch!” lead by MVP Dux Raymond Sy and RD John Peluso.

The following post is based on a webinar I recently conducted with Adam Leviathan.

When considering moving to the newest version of SharePoint, there are three areas that need to be considered. We’ll be discussing choosing whether to stay on-prem, move to the cloud, or use a hybrid scenario. We’ll also be diving into the high-level features of SharePoint 2019 On-Premises, and then move on to some key factors that will guide you to the appropriate next step. Let’s get into it!

Choosing to Stay On-Prem or in the Cloud

Know that you’re not alone when choosing the move to a new on-premises, hybrid or cloud solution. And let’s admit it: when it comes to user experience, people don’t like change. With this in mind, there’s been a lot in-between the updates of SharePoint On-Premises that allow you to keep the original user experience the same in backward compatibility mode, which is great for those concerned with having to adjust to a different view!

The next thing that we see in the latest version of SharePoint is a change in administration. The biggest thing with updates in administration is that there are now a bunch of different tools that the platform brings to the table, all of which helps make the admin’s jobs easier.

If you’re considering the cloud, know that the security will continually improve as updates are released. Those using On-Premises have to make an effort to keep up with improvements. 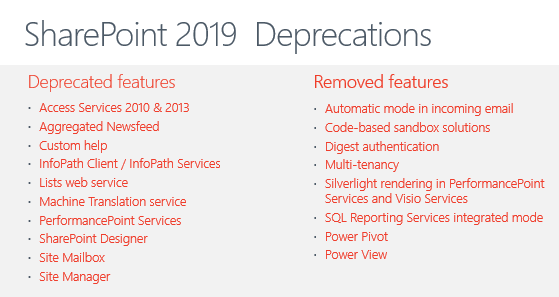 Looking at the chart above, the left column shows deprecated features, which means that they’re not going to put any more effort into them. On the right-hand column you see what features are 100% removed. There are both very important to note when considering what your organization prioritizes! 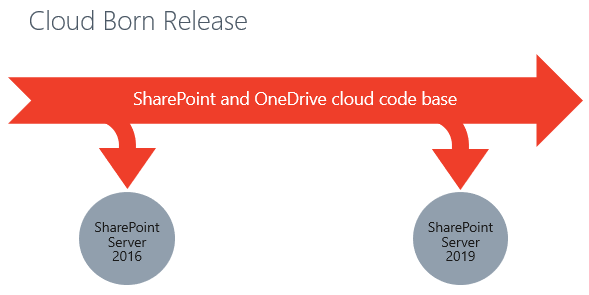 The first thing that’s coming in SharePoint 2019 that looks almost exactly like Office 365 in this vein is Site Creation. The new release is going to have a modern Site Creation interface that’ll allow users to use the Waffle to navigate to the SharePoint application and create a site themselves through the GUI. This should significantly lessen the load on admins and circumvent the need to click through an overwhelming amount of settings links.

There will also be updates to the modern team Sites. “Modern” is a term to differentiate between the old code and the new code. There are a lot of pieces that remain in place, but there’s also a huge reduction in the amount of code in general. You’ll also notice that this is the same infrastructure as Office 365. The beauty of it is that the re-formatting is actually usable and easy for people as opposed to the older versions (such as 2013 sites, for instance).

Modern Libraries are where data and information is stored and organized in lists and libraries. From the library side of things, there are surfacing capabilities that makes it significantly easier for users to get hard-to-find information. You’ve also got the nice modern slider panes that are now built into the libraries.

The other thing I really like about Modern Libraries is the ability to change your view to a tile view or a preview of the documents and images that exist in those libraries. It makes it so much easier than what it used to be in the old SharePoint UI interface. Now it’s a drop-down option that you can quickly access. Along with the updates to the Modern Libraries, there are now a lot more modern capabilities to go along with them too! For example, there are now one-click moves for documents and information.

Speaking of information, Modern Pages have made their way to SharePoint 2019. Modern Pages essentially use all of these preset zones and make it easier to add text to different web parts and incorporate your own information through those SharePoint framework web parts. It’s become so much easier now! 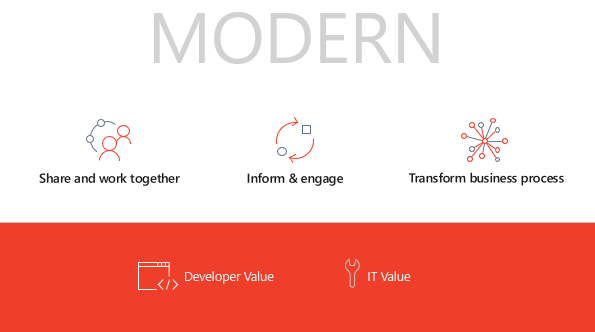 The new Modern experience is really catching SharePoint up to what industry standards are for what a web interface should look like. It’s great that they’re bringing this to the On-Premise platform with all these features that we’ve been enjoying in Office 365 for a while now.

Next up there are updates to Communication Sites. Communication Sites are where all the other features come together. It’s great for creating a site where people congregate and gather information. A great example of would be an HR site.

The out-of-the-box phone app for SharePoint works a whole lot better than anything that previously existed, especially with Modern Sites and the new mobile app redesign. It’s now significantly easier to use and see what’s being surfaced.

Part of this is likely due to Microsoft’s push towards cloud adoption. If you want to have and maintain a hybrid environment in the long term, for whatever reason, it’s a lot easier to do with 2019.

When it comes to migrating from an older version of SharePoint to a newer version, there are many factors that need to be taken into consideration. For example, you may need to answer questions such as:

There’s so much more to consider when thinking about migrating. For a comprehensive evaluation of what a migration project might look like for your organization, check out AvePoint’s hybrid and cloud migration services.

Hunter W.
Hunter has been in web development, SEO and social media marketing for over a decade, and has MCSA Office 365 & Service Adoption Specialist certifications. Throughout his career, he has developed internal collaboration sites, provided technical and strategic advice, and managed solutions for small to large organizations. Hunter is the President of the Richmond SharePoint User Group and works full time as Product Marketing Manager at AvePoint. He is a top contributor to AvePoint’s blog as well as CMS Wire and has been featured in over a dozen publications, most notably the Wall Street Journal.