HomeOffice 365How to Navigate the Changing World of #SharePoint, #Office 365, and #Azure
Office 365SharePoint/Hybrid

How to Navigate the Changing World of #SharePoint, #Office 365, and #Azure

Technology drives change, but it also changes  as much as the change it creates. The world of Office 365, SharePoint and Azure is no exception. Since its inception, all three have undergone tremendous change, with new apps, capabilities, and functionality being added all the time and it’s your job to keep up. These tools have enabled us to do business in ways that we didn’t think were possible and as these tools change, so must the skill sets of your IT admins, your decision makers, and your end users.

Last week, I was joined by Microsoft’s Michael Kophs, and our own Paul Olenick and John Peluso for a webinar on what to expect in the Office 365, SharePoint, and Azure ecosystem after Microsoft Ignite and where your focus should be moving forward. If you weren’t able to make it, check it out here, for FREE! We also help summarize key pieces that  will help you elevate those skills needed in today’s collaboration landscape and will maximize your ability to work as a team, keep in touch, and GET STUFF DONE!

Those who work in IT have likely heard this term, and may have written it off as a Microsoft buzzword,That’s how I felt at first, but when unpacking what the term really means, it starts to make more sense why Microsoft would go this direction.

So, what does digital transformation mean? Simply put, digital transformation is about reimagining how you bring people, data, and processes together to create value for your customers and maintain a very competitive advantage in a digital-first world. Microsoft CEO Satya Nadella has been saying for some time that every company today is a software company. Regardless of industry, you’re likely dependent on some form or software to get your work done.

Microsoft has broken down this concept of digital transformation into four core areas: modern workplace, business applications, applications and infrastructure, and data and AI.

The trick is leveraging these four areas to be able to empower employees, engage customers, optimize operations, and transform products to optimize your business processes to get the most out of all the technology available in today’s world.

One announcement that generated some buzz at Ignite was the advent of what are being called SharePoint Hub Sites. This feature will be available in SharePoint Online and it’s not known if it will be brought to SharePoint on-premise in the future yet.

What SharePoint Hub Sites allow you to do is take a group of sites that all have a similar logical association,  and nominate one to be the hub siteso you can have a consistent navigation across the hub and any other associated sites. Essentially, these hub sites provide common theming and navigation. 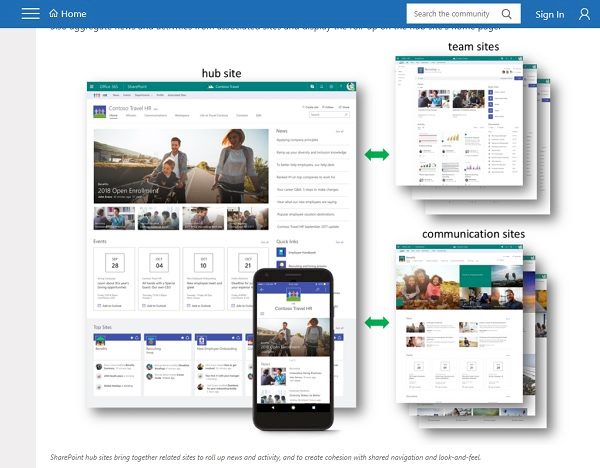 However, this is just the beginning. There is no security that will be inherited by sites within the hub, so it doesn’t really act like a subsite, but it works well for people that are looking for a simple way to do navigation. Additionally, these sites are very flexible. You can put sites within a hub, you can move hub sites around, they can be part of one hub or another, and you can change which site is the core, or main site, among others. One limitation that we know of is that there’s a one-to-one relationship between site collections and hubs, so you can only be part of one hub.

If you’re a SharePoint admin, you’ll want to get familiar with hub sites because what this introduction of hub sites may mean from a Microsoft standpoint is that there’s not going to be much investment in subsites moving forward.

Another announcement made by Microsoft, in an effort to bring SharePoint and Groups closer, was the ability to ‘Groupify’ a SharePoint site. This means users are able to take a SharePoint site that isn’t Groups-connected and connect it to Office 365 Groups. What this does is create an Office 365 Groups identity for the site, the existing site remains the Groups team site, but now you get a Planner board for the Group, you can enable Teams in that Group and so on.

If you’re an organization that uses Office 365 Groups and is looking to optimize your experience, check out our GroupHub solution!

One thing that we here at AvePoint took away from Ignite 2017 was that Microsoft has gotten it right when it comes to its messaging and guidance on what to use when. It’s no secret that Microsoft offers a lot of different tools and features across a multitude of platforms and sometimes that can feel a little overwhelming.

Now, Microsoft has consolidated its what to use when messaging into a simple graphic consisting of two loops: an inner loop and an outer. Think of the inner loop as a closed loop of people with whom you communicate frequently. This could be your project team, your department, etc. (think Teams) The outer loop is a broader, wider-reaching loop (think Yammer). 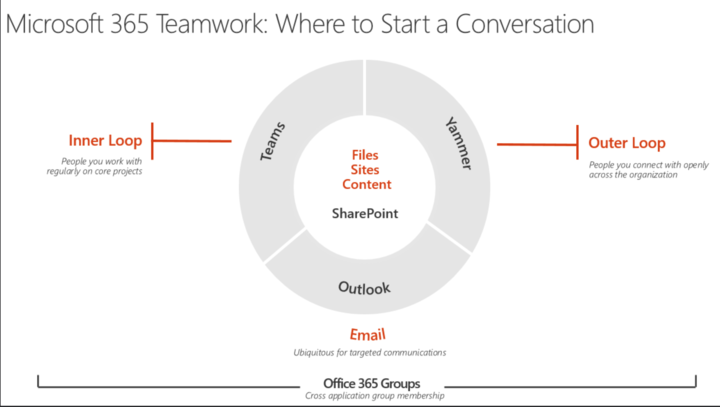 Speaking of daily communications, Microsoft has also made the call that, moving forward, Microsoft Teams will be the go-to client for calls, meetings, chats, etc., so if you’re not comfortable with Microsoft Teams, GET COMFORTABLE. Over the next six months, expect to see a lot of the core Skype for Business functionality that is not in Teams come into Teams and the plan is that by the end of calendar year 2018, Teams will be the fully fledged, first-class citizen for all communications formerly done in Skype for Business. 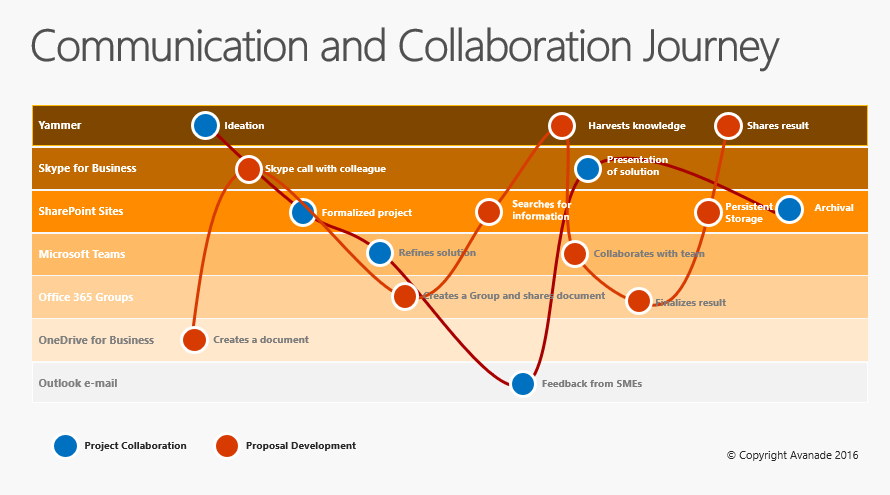 While we could write a whole series of blog posts around Azure, we’re going to focus on Microsoft’s AI platform (machine learning, cognitive services and bot services), Azure IOT, Azure security and identity, and Dev ops.

Artificial intelligence (AI) is one of the next big frontiers in the tech world and Microsoft is very much at the forefront of this changing reality. Machine learning is a major part of this new technological landscape and an area that has seen significant growth in relation to Microsoft.

IOT (internet of things) is another area in which Microsoft has grown in leaps and bounds in past years. Historically, Microsoft was not known as a competitive IOT player, but it’s been a thrill to hear Microsoft mentioned more and more in IOT circles over the past year or two and now they’re always mentioned in the context of the internet of things.

Furthermore, as always, security and identity are going to be top of mind for any employer, developer or architect. This is especially true as we go through this digital transformation journey where more and more customers are subscribing to service-based architecture and services. It’s important to understand  how to safely federate identities, manage encryption keys, etc. It’s going to be part of just about any solution that you’re going to develop, and there are a lot of tools in Azure to make things easier and more secure up and down the stack.

Finally, as we move along, we’ve got all these new tools and Microsoft has been generous in allowing users to write code in whatever language they want, and in order to allow those teams to perform their continuous integrations in application lifecycle management, you’re really going to want to become strong in the area of dev ops in general.

The key with Azure is to not be intimidated. Additionally, don’t assume you can’t do some of these sophisticated things around machine learning, IOT, and other advanced workloads. Microsoft is doing a really great job of making it easy to get up to speed.

Now that we’ve summarized key points, be sure to check out the webinar for yourself. For even more in depth information, and to hear from experts themselves, check out Microsoft Tech Summit – a series for which AvePoint is the proud Global Diamond Sponsor – coming to a city near you. The two-day events are packed with information! To see where we’ll be, check it out here www.avepoint.com/techsummit

I’ll be giving three sessions for Tech Summit: one based around Hybrid in Sydney, one based around Yammer in Toronto, and a Microsoft Teams session in Birmingham, UK. For any readers in those areas, stop in, say hi and check it out!

What is a Salesforce Sandbox?