S8 E5: Bringing Broadband to Everyone with Vickie Robinson of Microsoft Airband 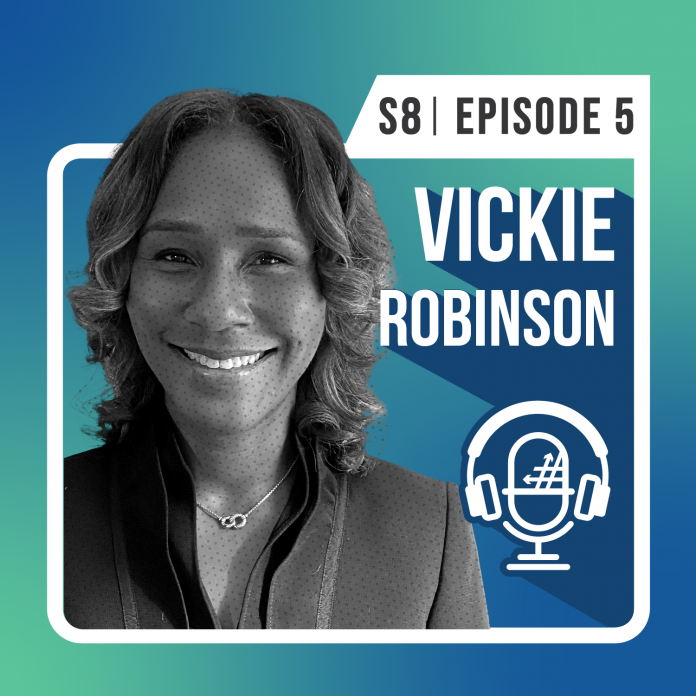 It’s the season for giving back and it’s the perfect time to talk about Microsoft Airband. This awesome initiative is working tirelessly and creatively to bring high speed internet and technical training to underserved communities. More than a hundred million Americans don’t have broadband and the pandemic has widened this gap as remote world and e-learning become a way of life.

My guest today is Vickie Robinson, General Manager for Microsoft Airband. We’ll talk about the project’s mission, evolution, and what it takes to deliver broadband to the people who need it most.

Vickie and the Microsoft Airband

I’m Vickie Robinson and I’m the General Manager for the Microsoft Airband initiative. The Airband initiative is a Microsoft program that’s focused on work and partnerships that we can bring to bear to help close the global digital divide. The program was initiated in 2017.

I’ve been here during the lion share of that time, and I’m really excited about the work that we’re doing that enables not just broadband access, but really about all the things that are locked as consequences of getting people connected.

The impetus of the Airband initiative

If you think about Microsoft and who we are and what’s been part of our DNA since the inception of the company many, many decades ago, Microsoft has always been about democratizing access to technology. And when Airband was launched in 2017, we really focused on the rural broadband gap.

There have been lots of things that have been festering in 2016—the election and this feeling of rural America being left behind. We at Microsoft believe that we should do something about that as a technology company, that we have a responsibility to lean in as appropriate, especially with what’s going on in the world and how things are becoming more digital, even more so now as a result of the pandemic.

And so, in 2017, we decided that we would launch the Airband initiative with a focus primarily on what we could do to help extend broadband access to unserved, but also underserved areas in rural parts of the country. And the response has been amazing.

The Challenge: The Digital Gap

If you take a step back in time, focusing on the size of the gap here in the United States and then globally outside the world, it was more than half the people across the world who did not have access to the internet. And then here, domestically, based on the Federal Communications Commission Data, the number was at about 25 million people who lacked broadband access, which is staggering, even back in 2017.

If you fast forward to today, according to the latest data set from the FCC, that number is about 14 and a half million, 11 million of which reside in rural areas. And then globally zooming out, we have nearly half of the world that remains offline. Microsoft and many others believe that the gap is actually a lot larger than the 14 and a half million suggested by the FCC.

If you look at Microsoft data, which is essentially anonymized data around how people across the country and around the world are getting access to Microsoft services and products at broadband speed, our data suggests that more than 120 million people are not able to access our services and product at broadband speeds. That’s somewhat different data sets. It’s not a one-to-one comparison, but if you’re thinking about what’s a better mark for where broadband actually exists, we think that you should choose a stronger indicator of where broadband exists today and where it doesn’t.

Closing the gap with digital equity

So, when the pandemic came, for us, it’s really been a matter of sharpening our focus. Again, we’ve always been focused on connectivity as a platform to do what we call digital transformation, which is used to empower connectivity and technology. But for us, it really pointed to this broader notion of not just simply broadband access and adoption, but this concept of digital equity we believe is something that’s relevant across the world, no matter where you sit.

And when we think about digital equity, that means access to broadband services, access to broadband-enabled devices, as well as the relevant digital skills to be able to use broadband once it becomes available to you. We’ve been part of the acceleration of our society becoming more digital, and with that comes the responsibility to do something about it. And that’s what Airband is really all about.

The Airband initiative is entirely partnership-driven, and that is really the way that Microsoft approaches its space in the world. It’s all about partnerships. We believe that it’s a holistic approach in that it’s not just focused on how we get people get access to broadband—the primary conduit of which are our internet service providers—but how do we enable broadband as a platform to do something more and to improve the quality of life for people in organizations and communities? To provide resiliency and improved outcomes and livelihoods? And that’s where technology comes to bear.

So, we also partner with technology solution providers and hardware providers, because we believe that if we can empower our partners to use whatever technology solution works best in the given geography, that’s how we can effectuate change. In addition to that, working with the Microsoft Philanthropy Team, we also provide community specific digital skills training. So, you really need to have those non-profit partners who really have an understanding and are from those communities to help drive and provide relevant digital skills training.

Focusing on policies and advocacy

Underneath all of that is really a focus on policy and advocacy. The digital divide is a systemic problem that’s going to require a systemic solution. We recognized that early on and again, the pandemic has only further clarified that point. If you don’t have policies in place, you’re going to put limitations on what can be done in specific communities.

But in addition to that, it’s also crucial to recognize that this is not a problem that the private sector alone can solve. We can’t do it all as Microsoft. There is a role for the public sector, and that comes in the form of funding and other things that the public sector can bring to bear.

And so that’s also been a focus for us as part of our work, even more so now, domestically, as you think about the passage of the Infrastructure Investment and Jobs Act, which is creating a once in a generation opportunity to really, hopefully, put a dent in the digital divide once and for all, and serve as a model for people across the globe who are approaching this problem.

There’s a thing we did in the face of the pandemic, which no one anticipated and how we met a very unique need. I love that our partners are scrappy. Our partners across the country, working with organizations like Lando Lakes, we’ve gone beyond just looking at rural broadband access issues.

We have partnered to provide WiFi hotspots in libraries, which are like the anchor institutions in our society and they’re the natural space for learning and education. Never taking our eye off the ball, we know that ideally, that is one way to address things like the homework gap—which is this phenomenon in which you have students who are able to be online in schools, but then they go home and they don’t have broadband access.

Another example is what we did in Ferry County. One of the things that is prevalent and unfortunately, it seems to be something that has become part of the new normal, is our forest fires. Working with our partners, we developed a mobile connectivity unit that’s able to sense and provide information around the tracking and growth rate of fires. That was with something called TV White Spaces, and that’s able to detect and provide information in real time about the tracking grade of forest fires.

One learning that stands out to me is really having a mindset to say, What’s the need and how do I meet it? One of the things that we learned early on is that we could not be pushing a particular technology solution just for the sake of pushing it, whether or not it made sense. We learned very early on that policy change is not overnight. And so that’s something that you have to be mindful of when you’re talking about doing work at this nature or any work that requires public policies to be changed or modified.

Another important thing is to empower your partners to be nimble. Pivot into many varieties of solutions to be able to tailor and determine what’s best to give in to communities. You can do more as you get people who are likeminded to go about and tackle big problems. Being open to or widening your tent, I think is the best practice in this space. You can do more with others joining you along the journey.

“To address a real pressing problem, you need to see and meet the specific community needs using the power of connectivity and ingenuity. And if you want to drive long-term impact and change, you have to provide a deep level of service and understanding that would result in better adoption.”