As I said in a previous blog post, one of my New Year’s resolutions for 2012 is to attend more SharePoint Saturdays. This past weekend, I took part in SharePoint Saturday Philly (#SPSPhilly) in Philadelphia, PA. As expected, there was no shortage of SharePoint love in The City of Brotherly Love.

I presented on Application Lifecycle Management (ALM) in Microsoft® SharePoint® 2010 at the event. I was pleased to get so much great feedback from the audience, as Dave Mann had warned me that Philly crowds can be pretty tough – especially for a New York Rangers hockey fan (They won 4-2 on Sunday against the Philadelphia Flyers…go Rangers!). The general consensus during the presentation was similar to the previous event I presented on ALM in New York City last Wednesday: Most were using source control in their application development, but not doing continuous integration whatsoever (three individuals put their hands up to say they were). Without continuous integration, developers can label a set of versioned files to represent a built solution package, but a build server will not automatically create a solution package from that labeled set and stamp the solution package with a unique label for future reference.

The general rule of thumb I pitch now is: If you’re developing at all in Microsoft® Visual Studio® 2010, you should be using source control at a minimum. You should also have all developers install SharePoint Dispose Checker to enforce the proper disposal of SharePoint objects.

During the presentation, the biggest agreement in the room regarded the use of SharePoint Designer 2010 in production environments. Essentially, most people create their applications with SharePoint Designer 2010 directly in production due to the difficulties in moving applications built in development environments to test then into production. It was great to hear some people in the audience recommend AvePoint’s DocAve Deployment Manager for promoting artifacts without a single prompt from me.

The biggest question during the presentation was: How can we do this without a third-party product? The answer is: With great difficulty. The only real way to do this, without packaging artifacts in a solution package using Visual Studio 2010, is to keep note of what files you’ve created/modified and then deploy manually by cutting and pasting between two SharePoint Designer 2010 windows connected to the two environments.

The slide deck for my presentation is available on SlideShare for you to view. 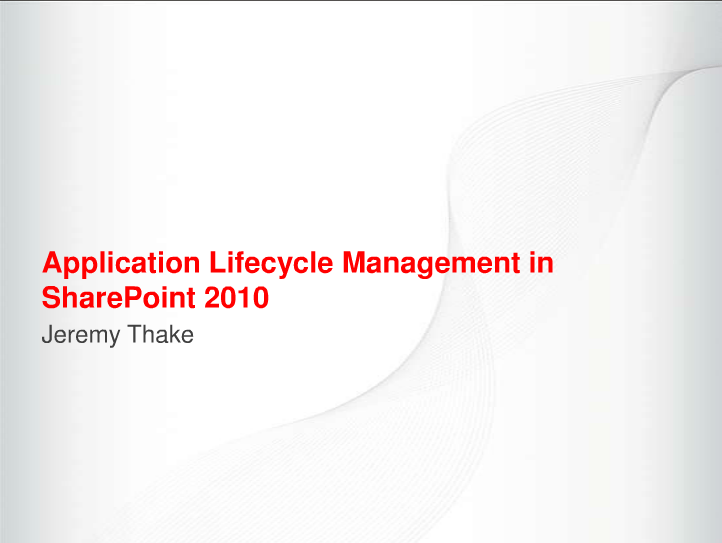 Tony Testa also presented on a related topic based on Team Foundation Server 2010, Setting Up a SharePoint 2010 Continuous Integration Process, which was a great follow up to my presentation.

The event was extremely well run, and both the lunch and vendor booths were perfectly laid out. It was great to catch up with so many passionate SharePoint community members and to celebrate a bunch of birthdays on Saturday evening at the SharePint. Marcy Kellar took some nice photos at both the event and the SharePint. Here’s one of me with Fabian Williams:

On my return to New York, I shared my first Manhattan driving experience with Fabian, Marcy, and fellow MVP Becky Isserman. It was Marcy’s first time in Manhattan, so I showed everyone around and then we all experienced the amazing New York Giants win at Superbowl XLVI at a local bar. Overall it was a great weekend! Thanks to everyone who made it happen!