Are you new to Microsoft Teams and want to have a positive user experience? Check out our free Teams Everyday Etiquette Guide!“

Microsoft quietly released the new organisation-wide teams update in Microsoft Teams towards the end of this year, adding the new functionality with considerably less fanfare than expected. In fact… almost no fanfare. The feature simply appeared along with a supporting technical support page—that was it.

In a nutshell, this is quite similar to Yammer in how it allows people from across the organisation to find each other, get tagged by others, and have conversations between departments.

Where this new Microsoft Teams update deviates, however, is most notably due to the current limitation of only allowing 2,500 members of an org-wide team. Any organisation that wants a community with over 2,500 members across the organisation will need to stick with Yammer for now. This is also most likely why the functionality was released without much fanfare – because Microsoft didn’t want to create more “what to use when” or “Teams vs. Yammer” conversations.

What does an organisation-wide team offer over a normal team? There’s only clear-cut benefit, though it’s a major one: the automatic membership for every current and future user in the organisation.

Because of this powerful feature, only administrators are allowed access (though anyone can be an owner). This means that IT can create the team itself before handing over control to a community manager or similar role that would traditionally “own” the management of Yammer.

Beyond the organisation-wide (ie. automatic user-enrolment) aspect of the team, it offers no difference to the standard feature set. This means that the team still sits on top of an Office 365 Group, has access to a SharePoint team site, document library, OneNote, Planner, and other resources. 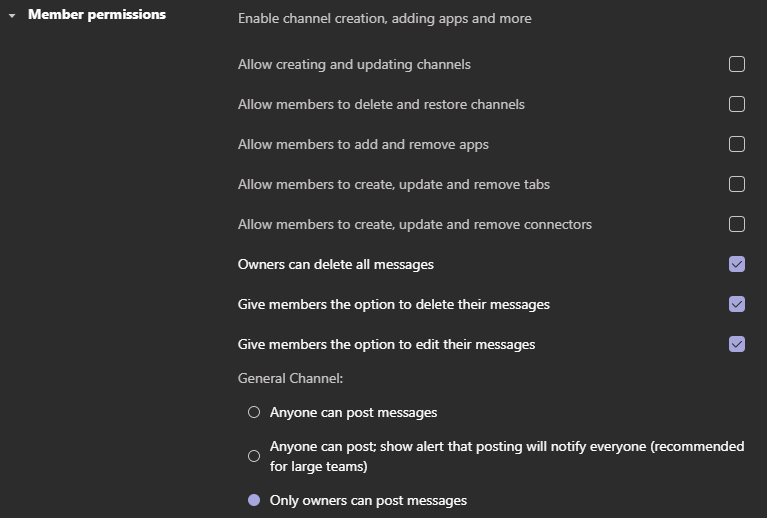 By effectively locking down the team, users can allow a community manager to manage its structure (e.g. different channels and tabs). Managers can potentially be granted Owner-level access so they can post messages and create channels as needed (i.e. location-based channels, specific work, and non-work-related topics, etc.).

These controls will stop staff from creating plans in Planner, changing the tab layouts (as each person has their own preference, and constant change might frustrate some), adding connectors that automatically feed in information, and so on.

It would be in an organisation’s best interest to prevent the ability of team members to be able to @mention the entire team, as this is effectively the entire organisation. In the case of emergencies or time-sensitive notifications, owners could still perform this function. However, removing the ability effectively prevents any staff member from being able to call attention to their post for every single person in the company.

Think of it as preventing the ability for staff to send a message to the entire company and have it flash up in their inbox at the same time.

One of the great features in Microsoft Teams is the ability to liven up conversations through the use of animated GIFs, stickers, and memes. In stark contrast to Yammer, Microsoft Teams gives owners the ability to set the tone for their teams by allowing control over the level of access to animated GIFs, as well as being able to turn the GIF functionality off completely.

As this is a team-specific setting, organisations can choose to have the organisation-wide team as a more straightforward place to converse whereas other teams can leave the functionality on (if they want).

Some organisations may have already set up a pseudo-organisation-wide team that pre-dates the new functionality. In those cases, there is no need to start fresh as existing teams can be “upgraded” by changing the privacy setting by going into Edit Settings and switching it to organisation-wide. 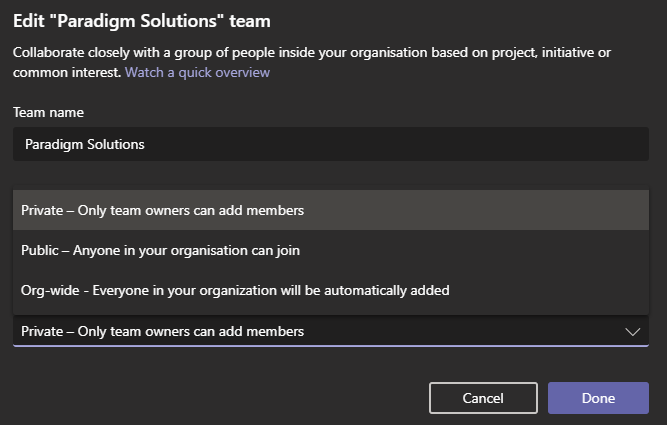 The ability to switch a team around from private/public to organisation-wide allows organisations to create and customize their team before launching it for the entire organisation to use.

What to Actually Use When

Like in all cases, what to use when is quite subjective. For organisations with over 2,500 users, the organisation-wide feature obviously isn’t practical since it can’t reach above the user limit. Organisations that have under 2,500 users but manage an active network don’t need to drop everything and change course straight away.

Take Control: How to Maintain a Healthy Work/Life Balance via Microsoft Teams

There is no right or wrong, and “best practice” is more subjective these days than actually prescriptive.

How to Get the Most Out of Microsoft Teams’ New Import...