HomeManageWhich Tool When: Microsoft Lists, Planner, Tasks in Teams, or To Do?
ManageOffice 365

Which Tool When: Microsoft Lists, Planner, Tasks in Teams, or To Do?

Get firsthand tips and tricks on leveraging these latest apps from Microsoft and AvePoint in our upcoming webinar, “Supercharge Microsoft Teams with the Newest Apps: Tasks and Lists!“

This post is the fourth in Matt’s “Which Tool When” series. You can catch up on past posts below!

2020 has proven to be a big year for new tools and features rolling out in Microsoft 365, including the introduction of Microsoft Lists—basically a major update to the SharePoint lists experience, presented as a separate app—the new Tasks app in Microsoft Teams, and various upgrades to the two major task apps, Microsoft Planner and Microsoft To Do.

This is bringing up a lot of questions around which tool to use when, and that includes confusion of overlap among these four apps. Good task management across your life is a nirvana that app makers the world over have tried to solve the best way possible; there’s a reason there are thousands of results among the Google Play and Apple App stores for task apps.

But where do Lists, Planner, To Do, and Tasks in Teams fall along the spectrum? There’s some overlap and there’s some aspects of these apps that aren’t actually just about tasks. So let’s dive in.

Are You Using the Right Microsoft Tool for the Job?

Let’s talk about what these tools actually are meant for. That doesn’t mean they can’t do more than what I cover, just that they aren’t necessarily intended to: 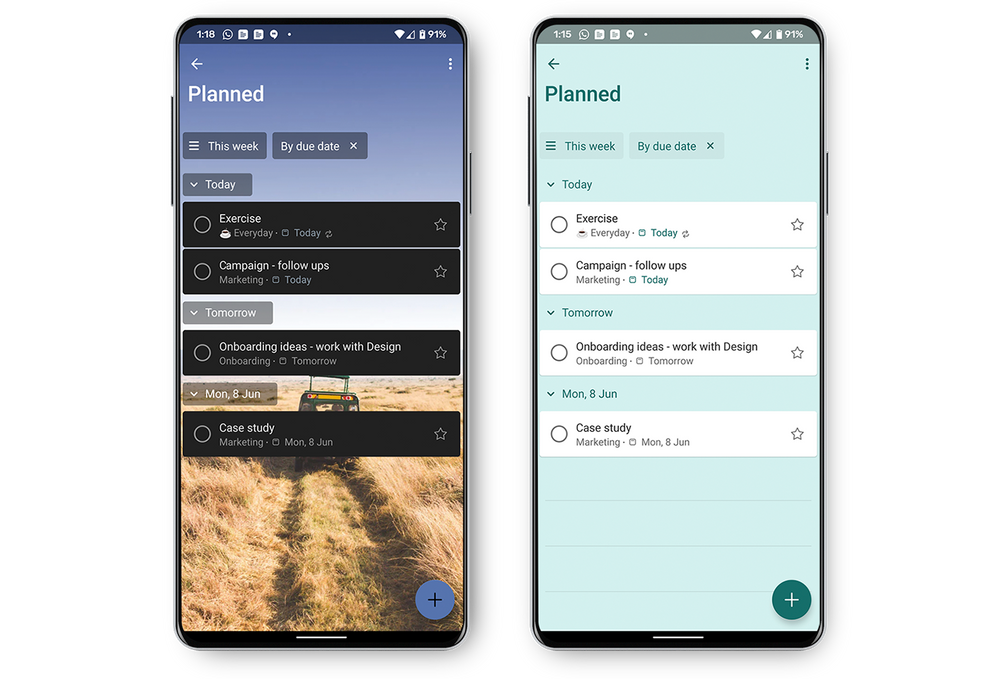 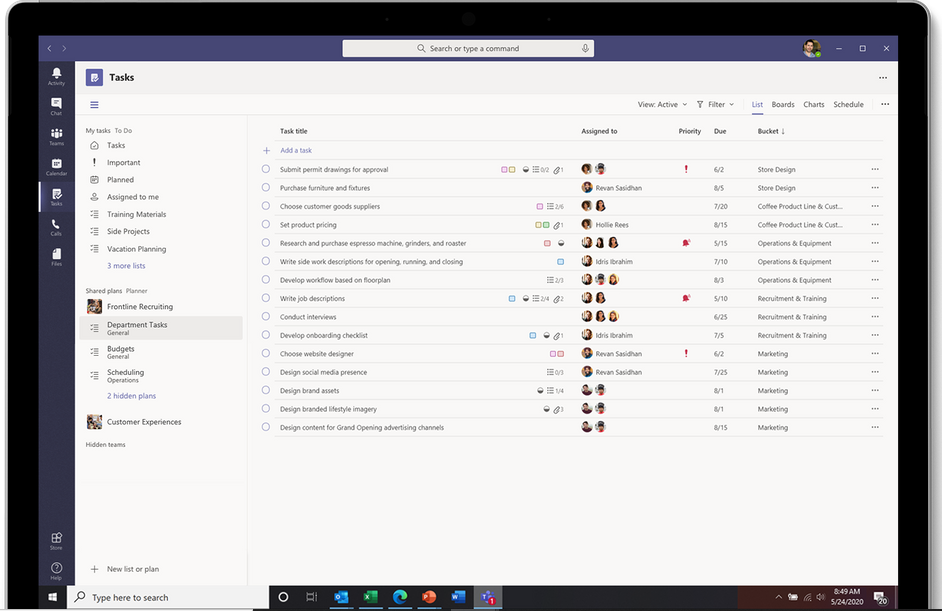 This basically comes down to whether the app stores and manages your tasks or presents your tasks into a single frame.

Planner and Lists are great for adding and managing team-based tasks and task lists. To Do is great for adding and managing personal tasks and task lists. Tasks in Teams is essentially a viewport to see all of your tasks in Planner and To Do. At this time, there is no integration to view any List tasks that are assigned to you through To Do and Tasks in Teams; that said, Lists is easy to add as a tab to any Team using its connector, so you have easy access to the list and your other tasks via Teams.

Now that we’ve covered the separation between storing tasks and viewing them, the real question of “Planner, To Do, Tasks in Teams, or Lists” breaks up into two questions:

As with most tech solutions, the answer is: it depends. 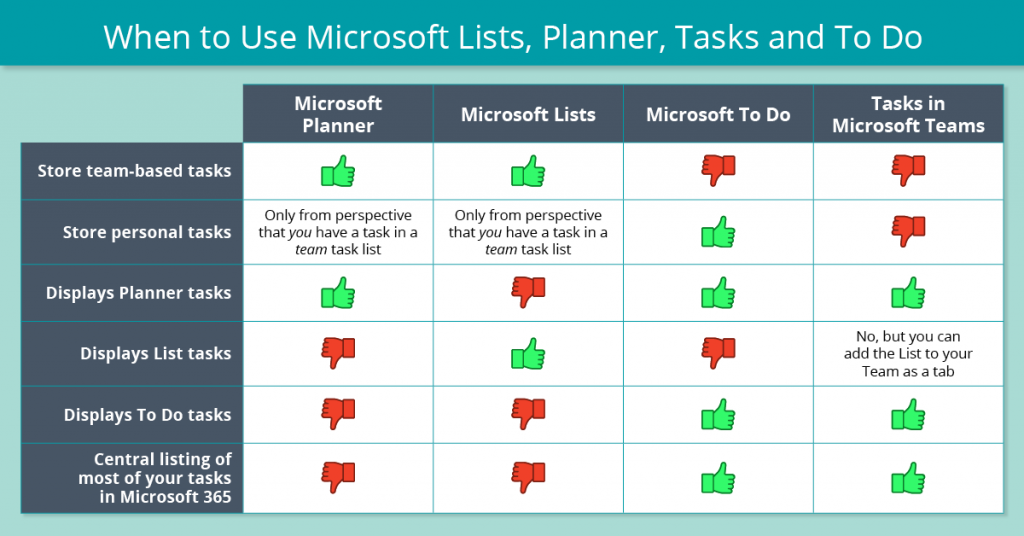 While it might look like there’s a lot of overlap between Planner and Lists, it’s not as much as you might think. Yes, you can essentially recreate a Planner experience with a List, but why would you if you don’t need the customizability?

Use Planner: If you want quick, easy, and simple-to-understand project management. It works. It provides a bunch of fields for your tasks, it integrates with To Do and Tasks in Teams, and it works great for both agile and waterfall project management, especially for small teams (i.e., not enterprise portfolio management). You can view tasks in a board or calendar view and there is a nice dashboard overview included. Planner is available as a web app, Teams tab, and mobile app.

Use Lists: If you want a customized experience where you can control the task fields, their options, their layout, their views, and more. You also want a list if you’re trying to manage things that aren’t really tasks. That brings us to examples like inventory tracking, asset management, event itineraries, and travel planning. You can view tasks (and other list items) in a list or calendar view. Lists is available as a web app, Teams tab, and mobile app.

But remember, if you’re really banking on having To Do and Task in Teams integration, you need to use Planner for team-based tasks.

Use To Do: If you want a listing of your tasks in a central spot, especially one that has a great mobile app and is easy to set due dates and reminders with (those push notifications really help!). To Do is great for managing your tasks on a day-to-day basis to help you build your personal schedule. To Do is good for granular task management. It’s available as a web app, desktop app, and mobile app.

Use Tasks in Teams: If you prefer a larger view of your tasks, perhaps in a list with columns, you’ll probably prefer Tasks in Teams. Tasks in Teams also separates your tasks out by Plan and Team, which means you can home in on tasks by project and deliverable, not just an endless list of tasks that were assigned to you to be done today (some of those days are simply impossible to complete, amirite?). Also, if you never leave Microsoft Teams and it’s your central hub for work, use Tasks in Teams. Tasks in Teams is good for big-picture task management. It’s available via the Teams web app, desktop app, and mobile app.

One thing you won’t see in any of these tools is Gantt chart functionality. This is likely because Microsoft Project—Microsoft’s premium project management tool—promotes this as a core functionality and they don’t want to cannibalize their own premium app.

You can find Gantt chart functionality in the “legacy” tasks lists in SharePoint Online. They’re not great, but they do work. And you can sync one Project file to a SharePoint task list to save on license cost and permission-protect various tasks. More details here.

The point is, if you’re hoping one of these apps will fill this need, you need to start looking at other tools because it’s unlikely Microsoft will provide fully featured Gantt charts into Planner or Lists. This is a major separation point from many of the competing list and task apps out there, especially Asana, Wrike, and monday.com, which all include Gantt views as part of their product offering (though, like Project, these apps come at an added cost).

You’re getting a lot of choices. And that’s because there are a lot of tools out there that offer some or all of these functions, all within those apps. And then you have various apps in the Microsoft 365 ecosystem that do some of them. Microsoft is doing its best to offer similar functionality so you get the most bang for your buck all while keeping your task and list information protected by world-class data protection and security.

On top of that, many of these new apps are evolutions of others and need to please the longtime users of those apps (Wunderlist, Outlook tasks, SharePoint lists). So when it comes to deciding what you want to use, consider the thoughts above and remember that if what you choose doesn’t seem to be working, it’s smart to sit down with your team, discuss what you want to see, and play with each app to see which one can get you closest to your goal.

Get real-world examples of how to leverage these apps in our upcoming webinar, “Supercharging Microsoft Teams with the Newest Apps: Tasks and Lists” today!

For more on Microsoft 365 management, be sure to subscribe to our blog!