When FrieslandCampina, a dairy food cooperative based in Amersfoort, Netherlands, made the decision to migrate its SharePoint 2007 data to 2010 and 2013, they knew they could use a little help with their SharePoint migration.

So, they reached out to Portiva, one of the largest SharePoint-focused Microsoft Gold Certified Partners in the Netherlands. They chose Portiva because of their reputation for timely and quality SharePoint migrations.

For FrieslandCampina, SharePoint is a critical system, supporting the organization’s many departments. With SharePoint 2007, the company could organize project and discipline sites, such as for finance and HR, to facilitate communication and knowledge sharing for 25,000 end users.

As the company’s deployment grew over time, an increase in sites and users prompted FrieslandCampina to consider migrating its 4 TB of data to SharePoint 2010 and then to SharePoint 2013, while preparing to migrate to Office 365 – SharePoint Online.

To facilitate FrieslandCampina’s SharePoint migration–from SharePoint 2007 to SharePoint 2010 and 2013–Portiva implemented DocAve Migrator, part of AvePoint’s DocAve Software Platform for SharePoint management. DocAve Migrator is a fast and cost-effective solution for migrating business-critical content that filters out unnecessary items and maps data to where it should live in a new deployment.

Throughout all stages of the SharePoint migration, Portiva could rely on AvePoint’s enterprise-ready solutions to deliver results for its client. “With DocAve Migrator, all files, workflows, and metadata are moved over with full fidelity, which saves us a lot of time,” said Biere. “The tool even sends detailed job reports once individual migrations are complete. With other companies’ products, some data and metadata would be left behind.”

DocAve Migrator also allowed Portiva to customize its SharePoint migration schedule according to FrieslandCampina’s business needs. For example, Portiva could schedule migration jobs to occur in the evening or over the weekend, which minimized downtime for end users.

The Results of a Successful SharePoint Migration

Without DocAve Migrator, FrieslandCampina’s full-time employees would have had to spend 40 hours a week configuring migration plans. Instead, Portiva and its client migrated during off-hours without losing any data. “Portiva and AvePoint offer robust, enterprise-ready solutions,” said van Schoot. “For our migration, the option of having automatic and scheduled migrations saved costs, as did the ability to implement incremental migrations.”

Portiva could also keep the lines of communication open with FrieslandCampina’s team. “When a migration ends, our client receives an email with their report from AvePoint,” said Biere. “We analyze the report, and our client lets us know if they have questions. This creates a very good experience working with AvePoint’s tools.”

By migrating FrieslandCampina’s 4 TB of data to a SharePoint 2010 and then SharePoint 2013 environment with DocAve, Portiva met its client’s need to reduce interruptions for end users and complete migration jobs quickly and accurately. Looking ahead, Portiva will support FrieslandCampina’s strategy to migrate all data onto SharePoint Online – Office 365. “The scalability, flexibility, and cost efficiency of Office 365 will be very beneficial for our organization,” said van Schoot.

To support FrieslandCampina’s future SharePoint Online environment, Portiva plans to implement AvePoint Online Services, a Software-as-a-Service (SaaS) platform that simplifies Office 365 management. “Moving to an Office 365 environment with access to features such as Microsoft Teams, Office 365 Groups, and OneDrive for Business will be the best solution for the company’s needs,” said Biere.

Portiva has also experienced the benefits of working with AvePoint’s 24/7 global technical support team. “When we’ve got a problem, the support team sends hot fixes whenever we need them,” said Biere. “It never takes long to get the hot fix.”

Fast responses from the AvePoint support team mean that Portiva can focus on achieving FrieslandCampina’s migration goals and promoting their success in SharePoint 2013 and, in the future, on the Microsoft Cloud.

If you’re looking to learn more about migrating to the newest version of SharePoint, check out our SharePoint 2016 Readiness Guide. It includes best practices for your SharePoint migration as well as how to plan. 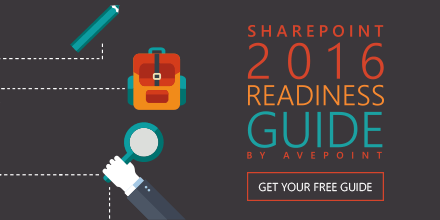