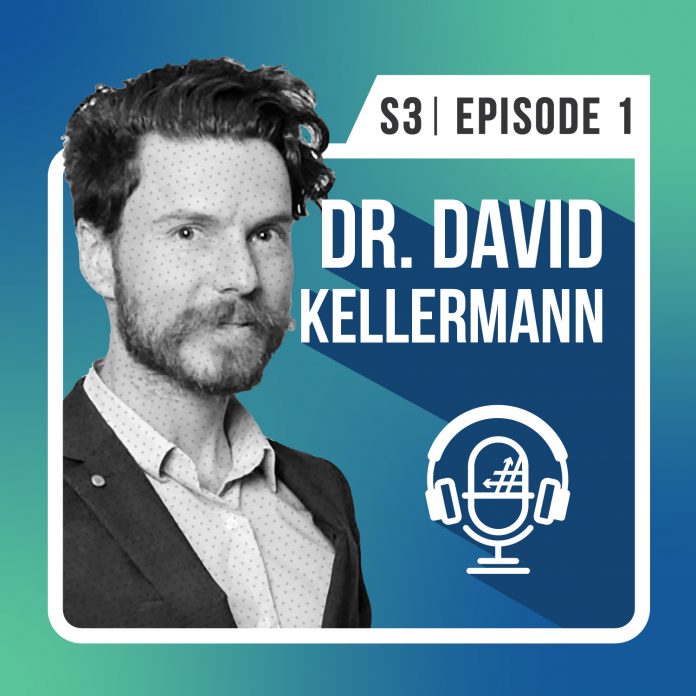 Presenting to Microsoft’s senior leadership team is one thing, but closing Satya’s Keynote at Inspire 2019 is a whole other thing.

Impressively accomplishing both, Dr. David Kellerman from University of New South Whales will show us how he developed Teams into the ‘most relentlessly integrated collaboration environment’ in higher education.

Today, let’s get inspired at how passionate he is at forwarding inclusivity and accessibility to meet learning outcomes better.

It was one of those once in a lifetime extraordinary events. At the end of June, I got the opportunity to present to the Microsoft senior leadership team, including of course, Satya Nadella. And one of the reasons for that was because I have been doing this work in higher education, and it’s been my pet project about this idea that we can deliver education on enterprise software. I didn’t want to tell people about it, I wanted to show them. And so I built it and this got a bit of attention and I got the opportunity to present to Satya, thanks to Rajesh.

After the presentation, he then said he wanted my talk at the end of the keynote. So he didn’t actually close, my talk was the last part of his keynote. He said the reason was because the way that I had tied everything together across the Microsoft’s software stack was telling the story of what he wanted from the company. He wanted to show how it wasn’t just a company filled with products that you could buy to do A, B or C, but that it was a cogent series of products that worked in concert together for the sole purpose of being more productive and achieving more.

My daughter’s 12, and her school is using a whole range of different bits of software to do different things. And every one of them has to be administrated, needs a login. But the real point about it is that there is no meta integration between these things.

And the other thing is, we’re not getting all of that deeper information. We’re not talking about telemetry and different information about how students are engaging. And we’re also not able to leverage one bit of content within another bit of content. And so, when we siloed these services, we’re stuck with whatever that’s giving us.

While looking at my teaching practice, I think about my students and how we have to prepare them for the workforce. And we’re using all of these software that is going to be redundant the day that they graduate. All of these bespoke bits of software that they were using, they will never use it again in their entire life.

And I’m thinking, if we were doing our learning in the exact same environment that they’re going to use the day they walk into the company after they’ve graduated, then we’re actually delivering better graduates who are more prepared. And not only that, we meet learning outcomes better, because we will be developing these professional skills and the ability to collaborate and communicate, and also the reciprocity that you get from students when you treat them as colleagues.

Teams as the ‘most relentlessly integrated collaboration environment’

In 2017, I’d already built a system that synchronized the student information system with Azure active directory and Office 365 groups. So Teams came, and I did this totally crazy thing that I don’t know that anybody had done. When Teams was a couple of weeks old, I put 500 people in one team.

What happened was that I walked into the lecture theater and I said to my students, “I’ve shut down the forum on our learning management system. We’re now using this thing called Teams”. No one in the world knew what Teams was, and certainly none of the students. And I’m saying, “Okay, just follow this link. You’ll already be logged in cause it’s on Office”. And everyone starts laughing and I turn back and I look at the screen, and they’ve already downloaded the app, logged in, navigated to the class, chatted. And then we’re posting memes and smiley faces and emoticons and things at and all were laughing. This took one minute for the students to jump and go, “Yep, I’m done with that old.”

Since then I’ve been going strong on this project of using Teams for what it is, which is not just a collaboration front end, a place to talk and communicate and have videos, but a place to aggregate all of the productivity software, all of the backend, which is the three clouds in order to just create the most relentlessly integrated learning slash productivity environment for my students.

Adopted by the University

My students loved it. It’s helping them learn. And then they started petitioning saying, “Hang on. How come the whole university doesn’t have this? How come only Dr. Kellerman has got live transcriptions, Teams, instant adoption?” It turns out that our students, not surprisingly, are really tech savvy. And we can provide tools in a monitored leveraged environment, where if you ask a question in a Teams forum, I’ve got an absolutely gung-ho set of amazing teaching assistants who are just in there 24 seven helping, so you can get your question answered quicker.

And so all of a sudden that’s where your community is. That’s where people want to be. That’s where the students are talking with and having fun. And that’s the moment where you are creating the complete environment to let your students do what it is they want to do.

Inclusivity and accessibility are two of the most important things. Not just because of the obvious, moral reasons that we want to include or make accessible educational experiences to somebody who has some challenge or boundary that we’ve put in front of them, but also because the world’s a better place when everybody is part of the development. Accessibility is this huge moral responsibility we have, and it is the way that we can make society better moving forward.

So now the idea is that every degree has to have the ability for anybody to engage seamlessly and they need to be able to do it without labels being put on them. And I call this multimodal engagement, which is, you can come to the lecture or I live stream my lectures. I use Office 365 stream to do that. So if you’ve got a hearing impairment, you can read the closed captions. We’ve achieved this thing where it doesn’t matter if you’re in a lecture theater or on a bus or nursing a baby, or sitting in a hospital chair next to your elderly granddad, you can be part of the experience with no compromise.

So we created this bot with a really simple, basic functionality, and which can be deployed with no effort. What it actually does is it learns with the students. It is the collective intelligence of the conversation of 500 students learning a course. And it’s adding value to the students in every interaction.

My students get their questions answered faster if they tag the bot, and they tag it on their own accord. If a student asks a question, “Hey, does anybody know what referencing system we should use for the lab report?” The bot uses natural language processing. It finds out that there was a similar question and it says, “Hey, I think the answer to your question might be in this thread from two weeks ago. Here’s a preview”, and the student clicks it.

So we’re connecting humans. We’re using AI to connect people to people and we’re building learning communities. We’re building collaboration. And this is a really different way of thinking about bots. They are not these things that can replace people doing tech support or whatever bots can replace humans. No, bots can actually enhance human interaction. They can connect people together.

This is also the point where you’re now able to see that the bots are not just doing this monolithic thing. The bot can now start using this structure that it has to leverage all of those other resources. So we’ve got chat, voice, video, communication, documents, digital ink, all of these things are happening. And this is of course not just data silos. It’s also a data schema.

So that brings us to the telemetry. Now we can take this data set and very powerfully use it to train machine learning. So not only is the bot able to leverage it, but the bot is contributing to a big database of information that helps us to understand how well a student is understanding it and use that to then generate content specifically for that student that’s going to help them get through it.

And this is something that I did. We basically built an algorithm that generated a personal study pack of every student based exactly on what they needed. And it’s like, this is the perfect, personalized, tailored study results. And it’s not just because of machine learning or algorithms, it’s because of the data schema and that integrated interface that we have along the collaboration.

Forwarding the cause to other universities

Universities have these mission statements and they don’t practically know how to achieve them when they put them out. And then they look at their software stack, which is a whole bunch of random bits of software that they’ve sticky taped together. And they go, “How on earth are we going to do this?” And so I built a proof of concept. I built it live in my own class and I’ve showed it and I’ve shared everything I’ve done.

Now we have entire universities that are adopting this approach. I have gotten a huge amount of personal contact from universities. A lot of meetings with vice chancellors and CIOs who were saying, “This is what we want to do, David. How do we do it? How do we move forward?” And it’s really exciting because universities are incredibly collaborative. We don’t really compete with each other in the education space. Universities compete with each other for research ranking, but education, we all just work together and share. We all want education to be better.

When the Shift Happened

Somewhere a few months into using Teams, as Teams started to develop, I had this thought where I was like, “What if I could do everything on Office? What would it open up to me if I had a native authentication system and API layer to every single thing that the students did?” That was like the moment for me when it clicked, where I thought, “Oh, wow, this is going to open up the possibilities to do AI and predictive analytics and tailored experiences”. So I would say that happened about the beginning of 2018, a couple of years ago, where I thought, “If I go all in on this, it’s going to open up possibilities that nobody else has.”

“It’s not just about the convenience of having this collaboration system that’s integrated. It’s the way that we can then generate brand new value by leveraging all of the information we get as a result of that integration.”

How to Effectively Govern Workspaces in Microsoft 365