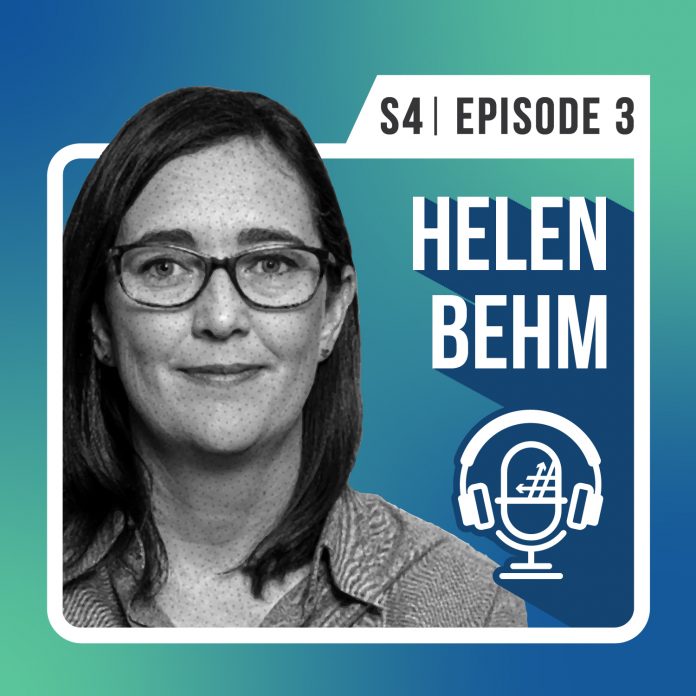 In today’s podcast, we look at HR’s perspective and insight when it comes to launching successful modern workplace projects.

With our guest, Helen Behm, HR Manager and Member of the South Africa Board for People Practices at Spinnaker Software, we will look at the challenges of forwarding modern workplace initiatives in IT and find out how they can be conquered.

In this episode, let’s see the value of learning how to unlearn.

I started with the company about 12 years ago. I would like to believe I’m quite privileged with the position that I hold because I’ve got access to a lot of information. However, that access though also means responsibility. I find that I seem to be the go-to person for a lot of things. I was spending more and more of my day just giving information and pointing people in the right direction. When we implemented Office 365, I saw that we had all these fantastic tools, but people weren’t using them. I saw how it could make my life and my colleagues’ life a lot easier. I realized then that access doesn’t necessarily mean adoption.

I was an HR manager in an IT company and we do software development, so I also had this bias that as IT professionals, my colleagues would be curious and that they’d want to go and figure things out. But I realized that it really wasn’t the case. There might be one or two early adopters to go and figure things out and learn how things work, but you realize that there are also people who need help and encouragement, and motivation to want to try something different.

On identifying the need for positive change and adopting Office 365:

When I started with the company, we were a handful of people in one central location and communication was really easy. As we grew and opened up offices throughout South Africa, Namibia and Botswana, we were still using the same types of communication channels. Then we realized that our projects weren’t going well, there were pushbacks on some of the projects, people didn’t know how to support the software, and new people don’t have a central place to get the knowledge they need when starting out.

Because of my position in the company, I saw these things that were going wrong. I realized that our company culture and our communication channels need to grow as well to really facilitate the scalability of the company. If we didn’t concentrate on that, we would hamper our future growth.

Pitching initiatives to IT colleagues

Back in 2013, data connectivity in Africa was not fantastic. Our IT was very much focused on making sure that there was enough bandwidth for our critical systems, so apps for communication, like Yammer, wasn’t seen as a critical business requirement. But, also, at that time, we had really good examples of where communication had gone horribly wrong. So we said, “Well, if we had Yammer in place, this is how we could have prevented that from happening.” So they’ve opened it up and said, “Okay, well, prove to us now that it’s going to work.”

We chose a few key players who we knew were early adopters in the company and whom we knew as natural communicators. That way, we were able to have good quick wins in the beginning that really showed how Yammer was going to become a critical communication within the company.

When our key players continued to post interesting features across different geographical locations on Yammer, we reached an equilibrium where it was being used, but a huge adoption still wasn’t in place. Then, we did a digital literacy campaign to also focus on the other aspects of Office 365. Just after that, COVID hit, so all of our staff were working remotely from home. That’s when we revived the Yammer project and said, This is the tool that we’re going to use to keep the coffee conversations going.

The value of executive leaders’ involvement

I think executive leaders set the example of what they would expect from Yammer. If an executive posts a funny picture or say something, then it sets an example and makes employees think, “Okay, well, I can be a little bit of myself on that platform.”

And of course, it’s a business platform, but I believe people should be able to debate certain things or give ideas or points of view that we don’t always agree with, so long as it’s done very respectfully. People should be able to put their opinions across. If we can have that diversity of thought and perspectives on a social platform at work, it drives that type of thinking within the company as well. So it really is a better platform to learn about the company and how to become a better ally as well.

An important word that could be used in understanding the process of adoption is unlearning. I think one of our biggest challenges has been helping people unlearn the way they did things in the past and motivating them to want to learn new ways of learning.

At first, we just focused on replacing Skype with Teams. And then we went to a deeper layer of adoption around “How do you collaborate using the same document?” There was one time, I was working with one of my colleagues on a document. So I sent it to him in Teams, and I said, “You can make your comments and suggestions here, and we can review it together.” And so we have a final draft and the next minute I got an email from him with it attached. And I’m like, “No, this isn’t how it works. Let me show you.” And a lot of the learning has been about unlearning.

When we embarked on our digital literacy program, we followed the Microsoft adoption guidelines on choosing champions. We call them Keystone Custodians because they’re the people in teams who know what the team looks like, what information should be shared, and how they can collaborate. We empowered them by teaching them everything that was available and allow them to then do a little bit of sprawl because that was the early adoption.

One of the most exciting parts for me has been looking into how we can keep the company culture going. It’s very easy when you’re all in the same geographical location because you get a tangible feel of what the company is like. But now with COVID, we are a distributed workforce. So how do I keep that culture going?

Now on a platform, you need to be a lot more intentional with communication. So we’ve been doing a whole lot of focus groups of late, asking our employees for their ideas and suggestions. We did some social events such as online lounge sessions with South African artists through Teams live, and it was really fun because we get to put our hair down and forget a little bit of all the stress brought by COVID.

It’s hard when everything is not serendipitous anymore. It’s like being in that awkward, difficult stage of forming a new relationship. But eventually you get back to a really good place where it just flows and it’s easy. As I’ve said, we need to be more intentional with our communication. And it’s going to be uncomfortable and awkward. But we have to admit that and say, “You know, it is going to be all of those things, but eventually it’s going to become a little bit more familiar and a little bit easier and a little bit more comfortable.”

When we were looking for a learning management system to roll out internal learning, I read a really interesting article that said it doesn’t actually matter what technology you use. Technology is only 10% of the solution. 70% of the solution is about the people and changing attitudes, changing behaviors, teaching and learning adoption. And then that other 20% is about the process and the workflow.

So my advice is to have a really clear purpose in mind. Why do you want to use Office 365 or SharePoint or Teams? What is the end goal? What is the result that you want for the business? Once you’ve got that clear sense of purpose, then you can identify your key stakeholders.

As HR people, we know it’s hard to change learned behaviors. But what I’ve learned is that internal communication is important. The way you communicate your purpose makes a huge difference to the success of the project.”

How to Manage Permissions During a Microsoft 365 Migration (Case Study)