Tag! You’re it! – It Works for Your Music and Photo Libraries, So Make it Work in SharePoint

So it turns out that mother doesn’t always know best —you CAN do your homework while you’re listening to music. Sometimes when I shove those ear buds down my eager ears, I want to listen to a particular artist. Sometimes it’s a specific album I’m looking for. Other times I want to just hear the acoustic tracks, while there are days I simply want to hear stuff from the 80’s (not that often, though). No matter what criteria I’m using to find the music I want at that particular moment, my music library software makes the search easy. Specifically, there’s a particular feature of that allows me to interact with my music in the way that best suits me—the ability to “tag” songs with metadata.

In the first post of this series we talked about classifying information by creating a hierarchical structure of containers (site collections, sites, lists/libraries, folders), each with a specific purpose. When executed properly, this “classification by location” gives our users a predictable place to find the information for which they may be looking. But how much of your content has multiple attributes that may be relevant depending on context? For example, say there is an engineering document stored, but it’s also relevant to your client XYZ Company, associated with a particular product you sell, and is also created in execution of Project ABC. This is where metadata – “data about data” – comes in. Truthfully, it’s hard to talk about SharePoint without hearing the word. Even in fairly basic SharePoint deployments, the ability to tag your organization’s information with metadata is one of the most swiftly adopted features. Metadata tagging represents a flexible way to classify content no matter where it “lives” in your information architecture.

Rich search, as SharePoint can now return results based not only on what the document contains, but also what we have to say about it in tags. Example: Search for “XYZ Company” and you find documents containing the company name as well as any documents associated with it via tagging.
Avoid information overload by offering users grouped or filtered views of the contents in your lists or libraries. Example: Make your marketing collateral library more navigable by offering users the choice of seeing the contents grouped by type (e.g. here are all the price lists, here are all the product datasheets) or grouped by product. Both “Resource Type” and “Product” are metadata that we define about each document in the library.
Create rules and plans for archiving, replication, backup, and compliance based off of content attributes with third-party tools such as those found in the DocAve Software Platform. Example: Archive all content associated a particular project, place it on legal hold, or copy just that project’s documents to a partner portal. Have content that is associated with a particular VIP client? Choose to back up just that content hourly, while the rest of your content may be just fine with a daily backup.

As you can see, classifying your content in SharePoint with metadata tags is a powerful practice with the potential for great reward. However, the adage “Garbage in, garbage out!” is true in this case as well. Let’s go back to my music and photo libraries to illustrate: Navigating my libraries by using metadata tags works great as long as the metadata column values are correct. It would be great to access all of my pictures from family vacations, but that requires me to have the pictures properly tagged as such. If you’ve ever seen a music library full of songs with titles like “Track 1, Track 2…” you know what I mean. When you are designing a metadata classification scheme, it’s much more than a “build it and they will come” scenario—you will need your users to breathe life into the effort by constantly and appropriately tagging their content.

So how do we do it? How do we simultaneously create a powerful, enterprise-wide classification scheme while making it easy and natural for users to actually use it? In SharePoint lists and libraries, we enable metadata tagging by creating “columns” that are very much like the “Album”, “Artist”, and “Year Released” columns we have in our music libraries. We can require that users specify values in these metadata columns when they upload/create content, or we can leave them optional. Keep in mind that inaccurate tagging is worse than no tagging at all, so be sure to put some thought into whether or not a metadata value should be required and give the user plenty of guidance about what you are expecting in this column by using the “description” field in the “column settings” page (see requisite screenshots from both the administrator and user perspective, respectively, below). After all, if you expect your users to take the time to enter data in the column, the least you can do is take the time to define what you are looking for. 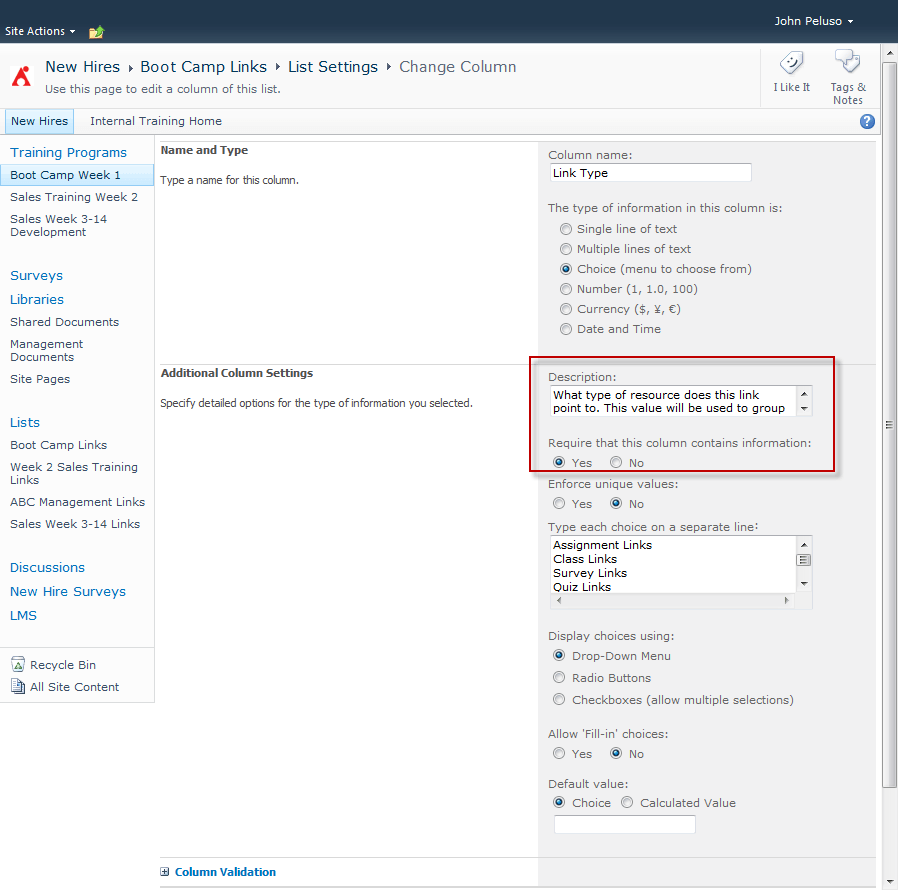 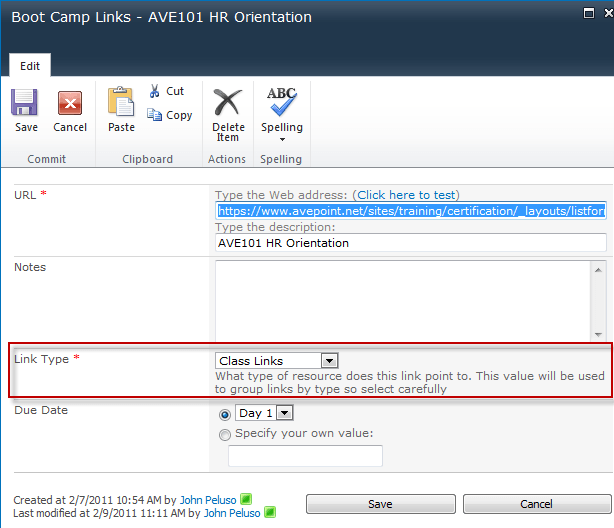 Now, metadata tagging has been a feature in SharePoint for some time—long enough to surface some common pain points. Since metadata columns are defined in lists and libraries, and many organizations have hundreds or even thousands of lists and libraries, the need and desire to “reuse” columns in multiple libraries is extremely common. It makes sense: If we are going to define “attributes” about the documents in one library, it stands to reason that it’s very likely those are the same attributes we may want to use to classify documents in other lists or libraries (either within the same site or across different sites). For example, let’s say we created a column intended to define which of our 16 regional offices a library’s documents were relevant to. Further, it is a best practice to try to use “choice” column types rather than free text columns as much as possible for some control on user tagging. It’s common practice to do this in databases so we can control user input, so do it in SharePoint also (imagine the pain filtering for documents tagged “US”, “U.S.A.”, and “USA” for America). Because columns are defined at the list and library level, you would normally create the column in the list/library and configure it with the appropriate choices and options. What happens when you want to also tag events on a calendar list with the same regional office relevance? Re-creating the column would be a pain, but more than that, updating the column to reflect a newly opened regional office as a choice would mean updating many columns in many lists or libraries—it’s not a scalable option, even in a small SharePoint deployment.

In MOSS 2007, Microsoft tried to help by allowing us to create columns at the “site” level that could be reused in any list or library in the site. This was fine as long as you had relatively few sites, but again, let’s take our “Regional Offices” column. It would likely be relevant in every site of the farm, so again, we were faced with lots of manual work to set up and maintain this column. Fortunately, we could leverage a tool like DocAve Deployment Manager to easily replicate site columns (and many other design elements like Content Types, List and Site Templates among others) to all of the relevant sites in our farm.

In Microsoft SharePoint 2010, Microsoft greatly improved the features available to “reuse” metadata across sites and site collections with the addition of Managed Metadata, Enterprise Keywords, and External Data columns. Managed Metadata is a new SharePoint “service application” that allows administrators to define “term sets”, a hierarchical set of attributes that can be made available in any list or library in any site (this is often referred to as a taxonomy). When enabled in a list or library, a user can tag content by associating it with one or more terms in the term set. These term sets can be “closed”, that is, users are forced to select from the pre-defined terms (this keeps tight control over user input), or they can be “Open” to allow users to either select from the defined terms or enter a term of their own which then becomes part of the term store and available for selection by all other users. Administrators can also set up “synonyms” so that they can funnel multiple similar terms into a single value, so for “America”, you could type in “US”, “U.S.A.”, or “USA” and it would go to the same value. Another valuable feature is the ability to merge terms after the fact – for example, two divisions of your company, Advertising and Marketing, become one after a corporate restructuring. We could merge the “Advertising” term into the “Marketing” term and, just like that, all content tagged “advertising” will now reflect the new classification. This is extremely powerful!

SharePoint 2010 doesn’t stop there, though. As powerful as a structured taxonomy is, it can also be valuable to see what our users want to say about their content with no guidance from us. How would they classify a particular piece of content? What do they “like” or find useful among all the information resources in SharePoint? “Enterprise Keywords” allow us to provide users a column to say anything they want about a particular piece of content. Any values that they enter in this column then become an option for other users to select as a tag for other content. What we’re doing here is allowing the masses to tell us what this content is. This creates a “folksonomy” that is created from the “bottom up” and pairs very nicely with our dictated taxonomy that we drive from the top down.

I’m out of space in this post – next time we’ll continue with managing the Managed Metadata service and another powerful information classification tool: Content Types.

3 Tips to Leverage SharePoint Online for Your Hybrid Work Setup