Why and How Companies Use SharePoint: A Study

Editor’s Note: This post is part of our series on SharePoint Deployment and is based on the AvePoint-sponsored research paper “Understanding the State of the Hybrid SharePoint Ecosystem.” You can check out the first blog post in the series here.

SharePoint is an effective collaboration platform for businesses around the world. What exactly causes organizations to adopt it so rapidly, though? Our survey found that the most commonly cited reasons for adopting and using the platform were:

In addition, the most common reasons for moving to SharePoint Online are:

While determining causes for migration is critical, it’s also important to uncover which SharePoint tools and features are being implemented. The most popular features in a hybrid solution are currently (in terms of percentage of respondents):

Meanwhile, the least popular features are:

Reports from SolarWinds also gave us valuable global insights into the areas of IT infrastructure that companies have already migrated to the cloud. These stats are based on % of respondents:

It’s natural to assume that the majority of the market will shift when new versions of software come out. That isn’t necessarily what happened with SharePoint, though. Our numbers show that, surprisingly, about 49% of the market is still using SharePoint 2013 compared to the 13% who’ve migrated to 2016.

Interestingly, our data also shows that companies running in a hybrid environment are more likely to be using the latest version. Some other interesting tidbits are: 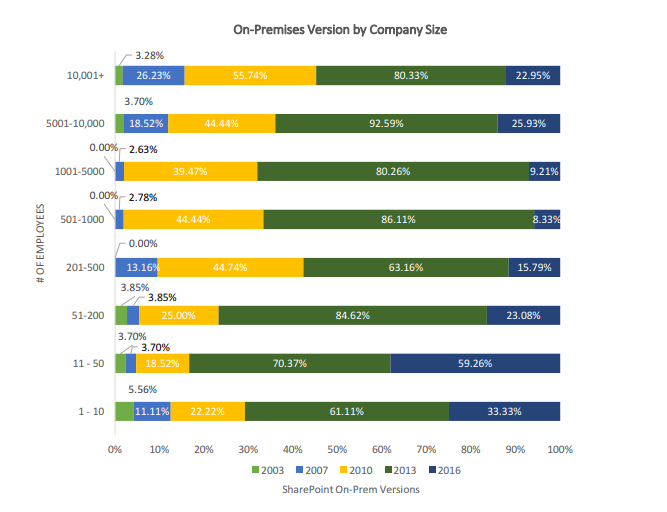 Are you tired of being held back by your on-premises development? Learn how you can successfully migrate your data with our special DocAve Migrators tools.

We also wanted to understand the solutions that companies might use going forward. Our findings revealed that: