Power Apps has proven itself as a great low-code solution for building powerful forms to improve business processes. One of the many advantages that Power Apps offers is the ease with which app makers can integrate with Office 365 and other SaaS and on-premises line of business data sources.

There are generally two approaches to performing CRUD (Create, Read, Update, Delete) operations in Power Apps. App makers can either:

There are implications to which approach an app maker chooses. In this article, we’ll be looking at the data loading scenarios in particular.

Today, there’s a limit to the number of items that can be returned to an app from a data source. The default of 500 items can be increased to a maximum of 2000 (under Advanced Settings for the app).

If the app attempts to retrieve more than 2000 items from a data set directly, only the first 2000 are returned. To improve the performance of apps and overcome this limitation, functions such as Filter, Search, and LookUp combined with delegation can be used to reduce the number of items in the app.

Using Power Automate allows the app maker to create flows that will be called during OnStart(), OnVisible(), OnSelect(), or other properties of the app to perform the data reading from sources that the user may not have access to and apply filters to the data source. As shown below, a secondary flow may be needed to access a secured data source that the user does not have access to but requests data from via a service flow that does have access.

The Power Automate approach extends the possibilities of the Office 365 apps. However, it also adds a level of complexity and reduced performance to the overall solution. The table below shows the results of an experiment I conducted that measures the time it takes an app to access data from a SharePoint list compared to the time it takes the app to retrieve the same data using a Power Automate flow as a conduit.

In the experiment, I used a simple list with just a Title field (a single line of text) and a complex list with the following fields:

The experiment was repeated 10 times for lists containing 10 items, 500 items, and 2000 items. One other experiment was performed where a flow was called by an app and returned nothing. 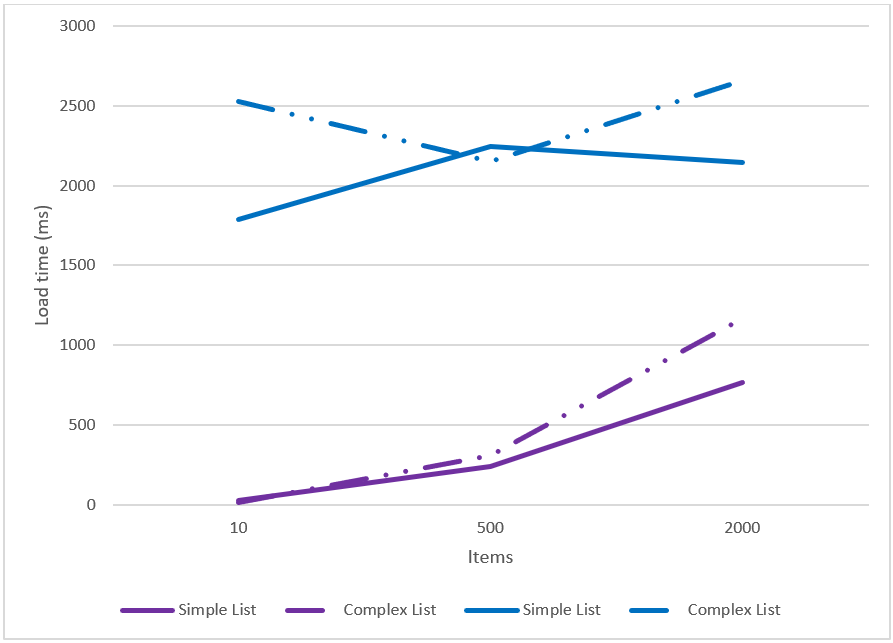 From the experiment, I concluded the following:

Based on the experiment, the app maker needs to consider the type, sensitivity, and amount of data that needs to be loaded. If the data lives in CDS, SharePoint, and SQL Server, and there’s no issue for the user accessing the source, then using direct access from the app is the preferred method for performance reasons.

However, if the data source needs to be secured or the amount of data is larger than 2000 records and filtering cannot be delegated, that’s when using Power Automate to retrieve the data is the way to go. A single app may leverage both approaches depending on the needs of the operation.

Learn more about how our Office 365 governance solution now integrates with Power Apps.

Want more insights into Power Apps? Be sure to subscribe to our blog!