When I relocated to AvePoint’s Melbourne office from Jersey City, people would often ask me, what is Melbourne like? Or more commonly, “Are there kangaroos everywhere?” Oddly enough no kangaroos, but there are drop bears (kidding)!

So, what is the culture like down under? While the office is very much aligned to AvePoint’s core values of agility, passion, and teamwork, there are local nuances that make the office uniquely Melbourne. Below I’ve detailed some core essentials. 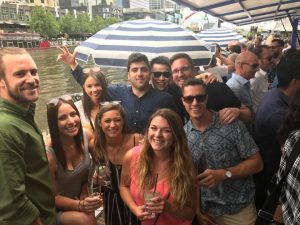 Mateship culture is defined as equality, loyalty, and friendship, and this is something I’ve experienced firsthand here. While the banter in the office is often sarcastic, at the end of the day everyone looks out for one another.

And unlike most places, the comradery doesn’t stop once the clock strikes 5pm. Don’t believe me? The influx of messages our Whatsapp group gets on the weekend begs to differ! 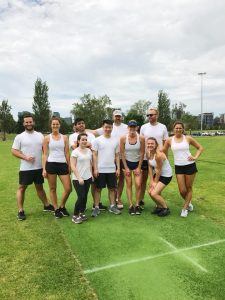 Alright, maybe we’re not necessarily running around the office in activewear, but Melbourne in general is a very active and pro-sports city. Whether it’s participating in AFL 9s Corporate Games, going for a run around ‘The Tan’ midday, or bringing homecooked meals for lunch, it’s a very health conscientious workplace, except for Fridays.

Fridays are reserved for fan favorites like Royal Stacks, parmas at Mitre Tavern, and during footy season, attending games at “The G.” Watching sports has the same impact as playing, right? 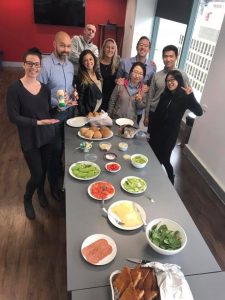 Did I mention we like food? I thought I knew what it meant to live among foodies, previously residing in Manhattan, but Melbourne-ites are passionate about their eats.

Even though there’s no shortage of restaurants in the city, which are often frequented during Friday team lunches, sometimes it’s nice to dine in. Featured here is our build-your-own schnitzel sandwich, as we celebrated “International Sandwich Day” on November 3. 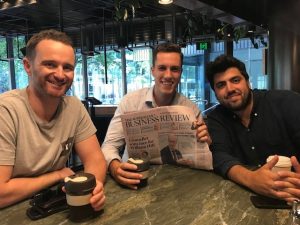 A wise man once said, “Mornings are for coffee and contemplation,” – thank you, Hopper (Stranger Things), but a morning coffee isn’t enough for Melbourne. Our days start with a cup from the local café, and around 2pm it’s usually time for another.

These coffee runs break up the day, give employees a chance to chat more informally, and are also a great way to network and stay in touch with clients. Much of Melbourne business is done with a brew in hand.

So, is the Melbourne office for everyone? Maybe, maybe not, but Melbourne has been named the most livable city for seven years running, so it must be doing something right!

By the way, we’re hiring in Melbourne, so check out our job postings today!

AvePoint Australia is Named a Great Place to Work

Talent Spotlights43Culture and Values35Career Advice9Wellness5Philanthropy4
Previous articleGlobal Mindset: A Key Part of our Corporate Identity
Next articleMore Than a Career, It’s an Adventure!